while the relay is used for devices with lower current and the contactor has an interconnected structure and can be easily installed. 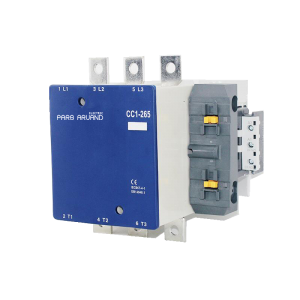 Setting up the DC motor shunt stimulation without the number of times of disconnection, disconnection of the motor when working

Setting up a DC motor shunt stimulation with a high number of disconnections at low time intervals, brake circuit

Auxiliary contactor, lacks power blades and lacks magnetic coupling. These contactors are installed on the main contactors and used only in the steering circuit.

Setting up a three-phase asynchronous shelf rotor engine, with opposite current brakes, changing the direction of the engine rotation, with high number of disconnections at low distances

Auxiliary contactor, lacks power blades and lacks magnetic coupling. These contactors are installed on the main contactors and used only in the steering circuit.

For pure lighting or ohmy loads

For motor loads without brakes and winding rotors

For motor loads with brakes or cage rotors

Types of voltage characteristics of contactors:

industry used and the load-feeding voltage. For three-phase loads, this voltage indicates the voltage of the line and for single phase loads indicates the phase voltage.

The insulating voltage of the contactor indicates the maximum permissible voltage tolerable by the contactor.

If this maximum voltage is applied to the contactor at line times in the system, it will not cause any failure in the insulation of contactors and other contactor components.

Errors such as asymmetric short circuit that increase voltage in healthy phases or higher voltage feeder connection to contactor feeder can cause voltage increase error.

The nominal voltage of the bobin indicates the permissible voltage required to stimulate the contactor bobin.

When choosing a contactor according to the conditions of the controlled process and various requirements such as safety of voltage of the steering circuit and control section is selected.

This voltage represents the nominal voltage of the required contactors.

Types of flow characteristics in contactors:

A permanent current, which is greater than the contactor’s named current, is a current that under normal conditions can pass through contactor blades permanently without damaging the contactor.

A weekly flow is a stream that can pass through contactor blades for a maximum of one week.

An eight-hour flow is a current that can pass through contactor blades for a maximum of eight-hour shifts.

In the time of short circuit before the protective devices attempt to cut off the fault current, contactors, like other equipment such as cables, bass bars, etc.

, should be able to remove the moment currents that pass through the contactor blades during short circuit without any damage such as welding contactors to platinum or due to mechanical stresses and dynamic stresses.

Also, the maximum effective amount of short circuit current that the contactor can withstand is called low time flow or one second flow.

Advantages of contactors over manual keys:

1- The consumer is remotely controlled.

2- The consumer is controlled from the location.

4- Their effective life is greater.

5- It is possible to design automatic steering circuit for different stages of consumer needs.

6- They are safer in terms of protection and have more appropriate and complete protection.

7- When the power outage of the consumer circuit is also interrupted and needs to restart, thereby preventing the risks of sudden power plugging of the device.

We use cookies from third party services for marketing activities to offer you a better experience.Accept and close